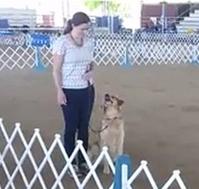 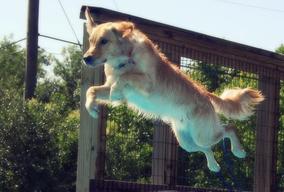 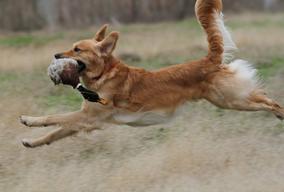 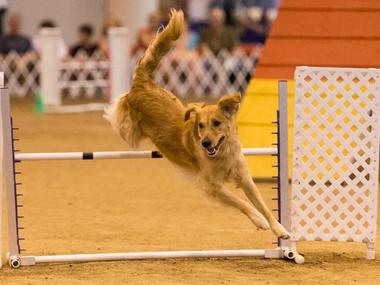 Red passed away on November 28, 2021, at home in his favorite spot on the couch, comfortable, peacefully, and surrounded by his loving family.

Red's frozen semen is available for TCI to approved bitches.

All while exhibiting a classic golden temperament with a gentle nature toward children and small animals.  In the ring or the field, he is human oriented and willing to work for any good handler.  Red earned MACH in 2013 at two years old, MACH 2 in 2014 at age three, ADCH plus MACH3 in 2015, MACH4 plus MACH 5 in 2016, and MACH 6 in 2017.  In October 2013, Red won the GRCA Excellence in Agility award for high in trial at the Golden Nationals agility trial.  In March 2016, Red qualified for the 20" Finals round at AKC Nationals, placed 10th, and was the top Golden Retriever.  He achieved Rally Excellent in 2013.  In 2014, Red completed the Novice, Graduate Novice, and Open titles in Obedience.  Also in 2014, Red earned the GRCA Working Certificate field title and AKC Junior Hunter, displaying fantastic marking ability. Red has achieved titles also in Barn Hunt and the exciting sport of Flyball!

In September 2017, Red and Amanda earned the Agility Grand Champion (AGCH) title after two years of focus on AKC Premier agility courses.  He is the fourth Golden Retriever ever in the country to earn this lifetime agility achievement.

Red measures 22 inches in height and weighs 60 lbs.  His parents are both accomplished agility dogs and Outstanding Sire and Dam.  Every one of his seven siblings has achieved titles varying in agility, hunt, field, and obedience.